Home > Learning an Instrument > How to Play Strings

How to Play Strings 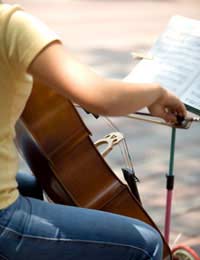 The strings - violin, viola and cello - share several common traits. All have four strings, tuned with the same intervals between them, and are mostly played with play rubbing a bow over the strings (called "arco") with one hand whilst the other hand fingers the notes. They can also be played by plucking the strings ("pizzicato").

For violin and viola, sit on a straight backed chair, and tuck the instrument under your chin, the neck pointing to the left so you can finger it easily. Don't put too much pressure on the body of the instrument, just enough so that it will stay.

Check the tuning. For a violin, from bottom string to top, the tuning is G(4)D(3)A(2)E(1). Working from an electronic tuner, piano, or pitch pipe, get each string close with the tuning pegs, then use the fine tuners (screws located above the bridge). For a viola it's CGDA.

The cello is much bigger, and held upright between the knees, the body resting on an adjustable spike. The bow is held horizontally, and the neck is held to the left side of the head. The cello is also tuned CGDA, but an octave below the viola.

With the instrument in place, use the index finger of your right hand and pluck each open string in turn. Pluck across the string rather than up and down. Keep the pressure even.

For most playing you'll use the bow. First of all you need to tighten it (loosen it again after playing), so there's a gap of about ¾" between the hair and bow at the closest point. Put rosin on the hair. Hold it in your right hand, and place your right thumb on the inside part of the bow. Lay your three fingers lightly on the top of the bow and your little finger close to the adjustment screw.

Rest the bow on the bottom string of the violin (G, C on viola and cello) and draw it down in a smooth motion, with not too much pressure. Now reverse the direction. Keep the motion smooth. At first the note you produce will be uneven and raucous, but keep playing until the sounds becomes steady and even. Keep the bow hair at the same point on the string as you play. Now try the next string and move along until you can play each one evenly.

Put the thumb of your left hand under the neck, with the rest of your fingers, held above the strings. Play the open second string, and then put the first finger of your left hand on the bottom string close to the bottom of the neck, adjusting it until the sound is exactly an octave below the open second. As you'll have noticed, there are no frets to show you where to place your fingers. It's a matter of practice and familiarity.

Play over and over, trying to find the notes. It's not easy, and you'll make lots of mistakes, but with practice you'll be able to move between the strings and even play a tune.

There's a lot more to learn, as you've only just begun. But with these basics, you've made a start on a pleasure that can last a lifetime.