Home > Learning an Instrument > How to Play Electric Bass

How to Play Electric Bass 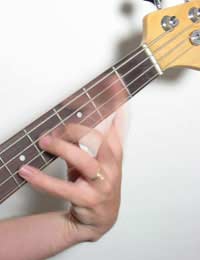 The electric bass guitar is a relatively new instrument, one that came into existence to support the louder electric guitar, and which first found itself in use during the early years of rock 'n' roll. Now it's a standard part of the musician's arsenal.

The first thing you notice is the thickness of the bass strings. From bottom to top they're tuned E,A,D,G - the same as the bottom four strings of the guitar, but tuned an octave lower. However, the neck of the guitar, or fret board, is a lot longer than a guitar.

The easiest way to tune is with an electronic tuner, and adjusting the tuning pegs. But if you're not using that, make sure the bass is tuned to the other instruments in the group.

The notes on the fret board are laid out like this, going from the bottom of the neck up to the twelfth fret. A note is played by holding down the string just below the fret and plucking it with the other hand, either using a finger or a plectrum.

The best way to start learning is playing scales. That's the notes in a specific key. In the key of G, for example, it would be G-A-B-C-D-E- F# (F sharp) and G. Practice this using the chart, at the bottom on the neck at first. You'll see it flows easily from the bottom string to the top. Now try it in the key of C, going C-D-E-F-G-A-B-C. Use the chart and try those scales starting higher up the neck. Try to move smoothly from one note to the next, keeping an even rhythm.

An even rhythm is really the key to playing bass. The bass take the role under the lead instruments, as part of the rhythm section along with drums or percussion, so it underpins everything. What it plays will be a mix of melody and rhythm.

As you begin to play, you'll find that after a while the fingertips of your left hand, holding down the notes, begin to hurt. The same will be true of your right hand if you use your fingers to pluck the strings. After a while they'll harden up - please be patient.

Unlike the guitar, the bass is a single-note instrument - you don't play chords (some bassists do, but that's very advanced). As such, each note counts. You might play just the emphasised notes of the music (which in 4/4 or common time are the first and third beats of each bar), or your role might be to offer a "walking" bass line to propel the song (the type heard on many old blues records), or even a counter melody.

Don't expect to be a genius overnight. It takes years of practice to become an excellent musician. Listen to your favourite bass players and they way they approach a song or tune. As a beginning, you can do a lot worse than try to copy others. It will open you to new ideas, and your playing will improve as you emulate professionals.

If you can't do it all immediately - and you won't be able to - don't become too frustrated. Practice and perseverance are important.

Having a bass guitar is fine, but unless it's an acoustic bass guitar (or guitarron, as they're called in Mexico), you'll need to amplify it. In the beginning, you'll only need a small practice amp, as the only person who needs to hear the sound is you.

Once you've mastered the basics, however, you'll want to play with others - by nature the bass isn't a solo instrument - and you'll need a louder amp and large speakers for the sounds. There are many available. Whilst those large bass cabinets with 18" speakers might look good, remember that they have to be moved, and you'll be the one moving them. It's worth the expense of the best equipment you can afford, which also applies to your instrument.

There are no guarantees you'll become a great bassist. But you will be able to hold your own in a band, and eventually develop your own bass style. Along the way you'll also find a great deal of fun.