Home > Learning an Instrument > How to Play The Keyboard

How to Play The Keyboard 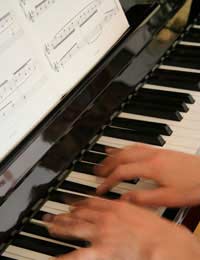 Go back a century or two, and it seemed that many people (especially girls) learnt piano. It was one of those skills that rounded out an education. Today, however, very few play, and the idea of sitting down at a keyboard (usually electronic, which takes up far less space than a real piano) can seem daunting.

A full piano keyboard had 88 keys in total (a little over seven octaves) - electronic keyboards will have less. The while keys are whole notes (e.g. C,D,E etc.), the black keys the sharps or flats you'll encounter.

Each octave consists of twelve keys - C, C#, D, D#, E, F, F#, G, G#, A, A#, B (not that a sharp can also be a flat, so D sharp can also be E flat, for example). The octave is grouped two black keys then three black keys, making it easy to find C. As a first exercise, play an octave on the white keys, eight keys going up from C to C, starting with the thumb. Hold your arm horizontal above the keys, fingers at 90 degrees. When you've played the first five notes, pass your thumb under to start on the remainder smoothly. Now try it going down, beginning with the little finger, and then passing that over after you've used your thumb.

Once you can co-ordinate playing up and down an octave with both hands together, it's time to learn a little about chords. A chord is nothing more than several notes put together. They harmonise to make a sound bigger than the individual note. The basic chord is called a triad, because it consists of the notes (the intervals are the root note of the chord, a third, and a fifth). Place your right thumb on C, first finger two white keys higher, and ringer finger two white keys above that - E and G respectively). Press them down together. Move the chord up and down the keyboard; keep the fingers the same distance apart. Now try it with your left hand.

The hard part comes when you try and move the chords up and down the keyboard with both hands. Persevere and practice until you can manage it smoothly, although it might take some time.

You've now mastered the basics of the key of C, which uses only the white keys in front of you.

Now you can try making the hands do different things. Think in 4/4 time - four beats to the bar. Have your left and right hands play a C chord together. But hold it with your left hand, while your right plays each beat of the bar. This is the next step in co-ordinating your hands to be able to play different things. Listen to any keyboard recording and you'll hear that the hands operate independently.

The best way to learn is to play regularly, at least half an hour a day if you can. Work on scales in different keys with both hands to get smooth movement in your fingers. A simple music theory book will give you the sharps and flats in different keys.

It's perhaps blindingly obvious, but the more you play, the better you'll become. Practice making chords in different keys, too. Once you've mastered triads, able to finger them easily, move on to chords involving the thumb and three fingers.

Try picking out a melody with your right hand, and putting in appropriate chords at intervals with your left. It takes some work and some trial and error, but when you finally manage it, the feeling is fantastic.

Good keyboard players don't need to look at their hands to play. They can feel the spaces between notes. Practice playing without looking. It'll sound awful at first, but gradually you'll become used to it and your confidence will grow.

The best thing you can do to become a better player is learn to read music. It will open up a new world to you, not only of music to play. You can continue to learn "by ear," but your knowledge will never be as great.

Buying A Secondhand Instrument
Share Your Story, Join the Discussion or Seek Advice..
what is the best song to learn on the keyboard
hi - 22-Sep-13 @ 5:34 PM
looking forward to learn from here
pet - 26-Sep-12 @ 2:05 PM
Remember that the co-ordination of having each hand do different things is complex to master. It takes time and it can be the thing that puts off most self-taught students. Anyone who's serious needs to take time over this - it will come with practice. And you should also emphasise the importance of practicing scale regularly, they're the basis of all playing.
William - 30-May-12 @ 10:27 AM
Title:
(never shown)
Firstname:
(never shown)
Surname:
(never shown)
Email:
(never shown)
Nickname:
(shown)
Comment:
Validate: