Home > Learning an Instrument > How to Read Music

How to Read Music 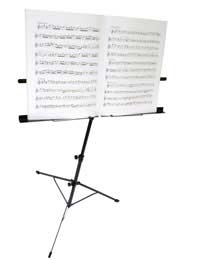 Many people find music scores daunting, unable to decipher the dots on a page. But music is actually a fairly simple language, easy to master. And once you've learnt it, it opens up a new world for you.

Musical notation is divided into two clefs, treble and bass, written for different instruments. They're written on a stave, consisting of five lines. The treble clef, with notes added, looks like this:The bass clef looks like this:At the beginning you see the time signature. In this case it's 4/4, or four beats to the bar, also known as common time, which you hear in most music. The emphasis is in the first beat of the bar. But time signatures vary, ¾, or waltz time, can be found often, and 6/8.

The length of a note depends on how it's written. A whole note like this would last for a full bar, or four beats:The half note lasts just two beats: The quarter note is a single beat, so there'd be four of them to the bar: Finally the eighth note has a value of half a beat, like this: Notes can have smaller values, too.

Music is written in a key. For example, something written in the key of C involves no sharp or flat notes, just the basic A,B,C,D,E,F,G. Other keys bring in different sharps or flats, which are the half tones between notes. The key of G, for instance, has one sharp, F, so the scale would be A,B, C, D, E F# (or F sharp), G. The key is indicated by the appropriate number of sharp or flat ( ) symbols at the beginning of the piece. It's possible to have pieces written in keys involving large numbers of sharps and flats. To those not familiar with musical notation, that can seem scary. But once you know your keys, translating those symbols becomes automatic,

The easiest way to learn the different keys is to practise scales in each key, playing the notes until they become second nature, and following them on the page. It can be boring, but it does pay off.

Like any language, music uses symbols. This at either end of a section means you have to repeat the section: Again, once you become familiar with notation, it becomes automatic.

You'll also see symbols above the stave. These are indicators by the composer showing the volume of the music. Forte, for example (shorten to f) means loud, with pianissimo, usually just p, means soft.

The most important thing when you're learning to read music is to count out the beats. You can do it in your head, out loud, or tap you feet. But keep the beat constant so you don't throw yourself off.

Practice is important. Don't expect to learn everything overnight, especially all the different keys. But the more you practice and become familiar with everything the easier it will become. There's also a strong logic to music, which makes it easier to learn. With sharp keys, for example, it's always the seventh note in the scale that's sharpened. For G it's F#, and when you move to D, the next in the progression, you add C# (for two sharps).

Don't be afraid of musical notation. It's true that a number of musicians don't read music, and have done perfectly well without it. But learning this does open up a whole new world to you, and can often double your enjoyment of the music you listen to.

Buying A Secondhand Instrument
Share Your Story, Join the Discussion or Seek Advice..
bisa ga minta dasar dasar konversi dari notasi balok ke notasi angka...biar lebih cepet bikin konversinya...
wong - 28-Aug-12 @ 2:51 AM
You make a valid point with this. for anyone wanting to play an instrument, learning to read music should be part of the package. You don't need to learn to sight read, but enough to be able to play the melody slowly. It gives so many advantages, and with practice your reading will become faster. Unless you have an exceptional ear, learning to read music should be classed as a vital skill.
Anna - 30-May-12 @ 1:18 PM
Title:
(never shown)
Firstname:
(never shown)
Surname:
(never shown)
Email:
(never shown)
Nickname:
(shown)
Comment:
Validate: