Home > Learning an Instrument > How to Play Brass Instruments

How to Play Brass Instruments 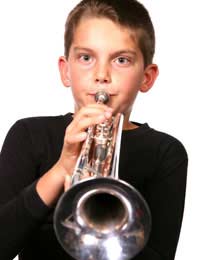 It's all about the lips. Beyond talking or eating, most of us rarely think about our lips, but if you're going to play a brass instrument, you'll be considering them a lot. If the roaring sound of a brass band has inspired you to take up an instrument, or you simply love the sound of a trumpet, your lips are going to feel the strain.

Valve brass instruments use a set of valves (which are actually really pistons) moved up and down by the player's fingers to produce different notes. Most modern brass instruments excluding the trombone use valves, including the sousaphone, flugelhorn, trumpet, horn, euphonium, baritone horn, tuba, cornet, and the obscure mellophone.

Slide brass instruments use a slide that's moved in and out to change notes. The main instrument in this category is the trombone (however, it is possible to find valve trombones).

With natural brass instruments, it's only possible to play notes in the instrument's harmonic series. The bugle is a prime example. These days' natural instruments are usually only played for ceremonial functions and some period performances.

Finally, there are even fingered keyed or brass instruments, whose holes along the body of the instrument are covered by ones fingers or by operated by finger pads (keys) in a comparable way to a woodwind instrument. However, these are quite rare.

The vast majority of brass instruments have a removable mouthpiece. Different sizes, shapes, and styles of mouthpiece can be used to suit different embouchures (that's the tension of the lips on the mouthpiece), or to more easily produce certain tonal characteristics. Trumpets, for example, generally have a cupped mouthpiece. Children probably shouldn't start to learn brass instruments before the age of 11, by which time their permanent teeth should be in. Before then, with their teeth changing, the embouchure will need to be adjusted regularly.

Essentially, with brass instruments, the sound is produced by the player buzzing his or her lips into a mouthpiece. You change the pitch by altering muscular contraction in lip formation (start with a kind of stiff smile). How you tighten your cheek and jaw muscles, as well as manipulation of the tongue, can affect the embouchure. When you first try it, the result could be anything from low-pitched to a high-pitched musical note, depending on the tension in the lips. You need to learn to contro and manage this.

Once you have the hang of producing a note, experiment a little with altering the way you hold your tongue in your mouth. Be warned that your lips will probably feel strange for at least the first few times you play a brass instrument. Once you feel you can control the air going into the mouthpiece, try using your fingers to change the notes.

With trumpets and other three-valve instruments, the valves allow you to change pitch. Depressing the second valve will alter the note half a step, whilst just the first valve will take it a whole step. Use the two together, and it is one and a half steps. The second and third valves together will make a difference of two steps, the first and third two and a` half steps, whilst depressing all three valves together changes the note by three steps (with some of those combinations, you have to provide "compensation" by extending the third valve slide using your little finger).

The trombone uses seven different positions on the slide. When it's in "first position" the slide is retracted all the way. In "seventh position" it's fully extended (during practice the primarily position is played with the slide extended by a slight amount in order to prevent injury to the musician through continuous impact the lips with a hard metal object, and also to allow vibrato). As you extend the slide from one position to the next, it lowers the pitch by one semitone.

Practice moving smoothly from one note to the next, keeping the pressure and breathing even. When you can do that, attempt a scale, moving up and down the notes. After that you can begin working on tunes.

Buying A Secondhand Instrument
Share Your Story, Join the Discussion or Seek Advice..
It goes without saying that you’re really only going to master the instrument if you have a proper teacher. You need to learn positioning and breathing techniques, as well as tonguing, and you won’t manage those yourself. Once you’ve mastered the basics, there are plenty of brass bands crying out for players!
Ray - 26-Sep-12 @ 11:00 AM
Title:
(never shown)
Firstname:
(never shown)
Surname:
(never shown)
Email:
(never shown)
Nickname:
(shown)
Comment:
Validate: