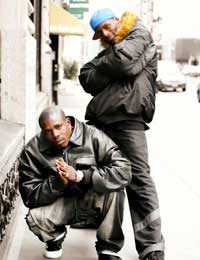 Hip-hop, once called rap music because of the talking or rapping that's such an integral part of the music, has gone from local to global in less than 30 years. It's no exaggeration to say it's the most popular music on the planet, known virtually everywhere.

New York in the mid 1970s was the centre of the disco movement. But up in the Bronx, other things were happening. There were parties in the parks, where the music was provided by a DJ with two turntables. Kool Herc, a Jamaican immigrant, is credited with being the first to become creative with the turntables, using two copies of the same record to create "breaks," where a section on one disc was followed by the same section on another, and also the "scratching" that typified early hip-hop. He was supposedly also the first to rap over the top of the music, inspired by the Jamaican spoken style known as "toasting."

This radical reinvention of music spread across New York, moving downtown into the clubs, and new DJs appeared, people like Afrika Bambaata and Grandmaster Flash, who would be important in the early history of the music. However, the first rap record didn't appear until 1979. Even then "Rapper's Delight" by the Sugarhill Gang was backed by studio musicians, not turntables.

It didn't remain an underground music for long as artists like Kurtis Blow followed with "The Breaks," and even New Wavers Blondie jumped on the bandwagon with "Rapture." But the possibilities of the music began to be explored with Bambaata's "Planet Rock," and a year later he introduced sampling with "Looking For The Perfect Beat."

Hip-hop had rapidly broken out of the ghetto, creating stars like RUN-DMC, Grandmaster Flash and several others. But it really broke through to the mainstream when RUN-DMC teamed up with rockers Aerosmith for a reinterpretation of the latter's big hit, "Walk This Way," that rocked the charts.

As The Music Develops

In its early days, hip-hop had seemed an exclusively African-American phenomenon. But that changed, and the Beastie Boys provided a raw white aspect, emphasising the part aspect of the music. Salt-N-Pepa showed the girls could rap as well as the boys, and by the latter half of the 1980s, rap had a political face, thanks to groups like Public Enemy and Boogie Down Productions.

At the same time, on the West Coast, there was the rise of the genre called "gangsta rap,' mostly notably from the group NWA. They celebrated life in the ghetto gangs, and the money and violence that came with it. Many were disgusted, but others loved it, and it quickly proved to be one of the most commercially successful hip-hop styles, finding particular popularity with white suburban teenage boys.

It gave rise to a number of stars, the biggest being Snoop Doggy Dogg and the producer Dr. Dre.

The 1990s brought a rivalry between East Coast hip-hop and that of the West Coast. That would culminate in the shooting deaths of rappers Tupac Shakur and The Notorious B.I.G. But hip-hop has long been dogged by violence as many of its practitioners have come up through drug gangs (or at least claim to have).

Since the turn of the Millennium, hip-hop has not only become the leading pop music genre, it's also achieved a global impact - it's known in almost every country. New stars come and go, but some have proved to have staying power, like 50 Cent and Eminem. It remains dogged in controversy for its misogynistic and homophobic lyrics, but still sells in the millions.

Much as rock'n'roll in the 1950s, it's the sounds of youth, especially disaffected youth. So it's found homes among teens. It's proved especially popular in West Africa, notably Mali, which has a huge hip-hop scene, and the Middle East, where it has strong political overtones among Arab youth in Palestine.

But hip-hop doesn't exist as a stand-along genre. It has influenced almost every type of modern music, from electronica to straight pop and rock, making it, without doubt, the most pervasive contemporary musical style.