The History of Classical Music 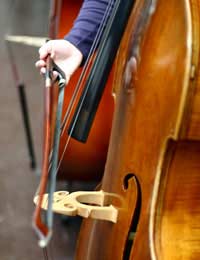 Classical music is actually a catch-all term covering centuries of music. Although it's often thought of as orchestral, it can also encompass smaller groups like trios, quartets and quintets - there's even music written for octets (eight instruments). Essentially, classical music is made up of several periods of music - Early, Baroque, Classical, Romanic, and Modern. Each has its own style and sensibility and its own main composers.

Early, of course, is a relative term. But in general, this refers to music before the 1600s, most particularly Medieval and Renaissance, and most specifically, music written in Europe. The chanting of monks is early music, from a time when most of the music was religious.

By the Renaissance, men were exploring far and wide, and music also became more adventurous. With the advent of printing, sheet music had become more widely available, and music was a vital part of a good education. Composers like Giovanni Palestrina brought in previously unimagined elements, such as harmony (where instruments play two complementary notes, rather that the same note), and we see the first stirrings of the orchestra, with bass and treble instruments working together for a full sound.

Running from around 1600 - 1750, the Baroque period saw the first real flowering of classical music, with the use of the orchestra. The elaborate, ornamented style reflected what was going on in art and architecture at the time. One of the biggest changes was that musicians were often employed by royalty and the wealthy, so they had security for the first time. That gave composers the opportunity to explore and experiment with music, even though they were essentially writing to the order of their patrons. The period brought forth music rich in texture and melodies, including some of history's most famous work, like Antonio Vivaldi's "Four Seasons, Handel's "Water Music," Pachelebel's "Canon In D" and John Sebastian Bach's "Toccata and Fugue In D Minor."

The classical period was relatively short, only from 1750 to ca. 1820, but a time of majestic music, as composers like Beethoven and Mozart. Public, rather than private concerts became the norm, and more people were exposed to music. The classical period saw the rise of the epic symphony, as well as the concerto (featuring one instrument with orchestra). The orchestra became more fully developed, and the pieces, such as Beethoven's Fifth Symphony, were essentially the pop music of their day, split into movements and lasting around 40 minutes. More than ever before, music was raised to an art form, complex and lush, as we know it today. Beethoven, Mozart and Haydn were the leading composers.

The Romantic period (1820-1900), built on the Classical era, but also reflected the more Romantic era of literature that was sweeping across Europe. New developments in brass and woodwinds made the instruments easier to play, and they became incorporated into the orchestra, widening the range of sound and texture. It was a period of flamboyance, with melodies and arrangements that sometimes went over the top as they strove for a big sound. The symphonies became longer and even more complex as the composers seemed to strive to outdo each other. But with the "1812 Overture" (Tchaikovsky) or Brahms' "Lullabies," among many others, the Romantic period also produced its share of brilliant music.

With the 20th century, many of the old music conventions were thrown out of the window. Composers like Schoenberg tried new music systems, such as the "twelve-tone" system, that defied the conventions of Western music. Others, like Stockhausen, pioneered a "musique concrete" that melded electronics with music for a new form. Some even made silence a vital part of heir sound, like John Cage's "4'22" which was simply four minutes and 22 seconds of silence. Some like Hungary Bela Bartok, took inspiration from folk melodies, whilst some, people like Frederick Delius and Benjamin Britten, remained true to the orchestral form. It's been a period of huge experimentation. At times anything and everything can be an instrument, or music can be reduced to the minimalism of Terry Riley and Philip Glass, where phrases are repeated over and over, changing slowly and subtly.