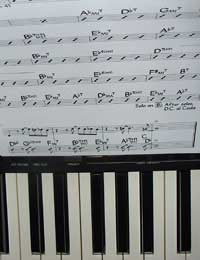 Once you have a song, you're still only halfway to a finished product. The songs you hear performed live or on disc have all been arranged, either by the musicians playing them, or by a professional arranger.

What An Arrangement Does

Properly arranged, an arrangement not only frames a song, it heightens the melody and emotions the song contains. For example, the right chord, properly placed, can pump up the excitement of a chorus. A riff (or melodic phrase) played on guitar; keyboard or another instrument can provide a memorable instrumental "hook" that sticks in the memory.

The arrangement fills out a song. It might include a solo in the middle by an instrument, or could encompass an orchestra or strings, especially on the slower ballads.

How An Arrangement Works

The first thing to do is to sense the mood of the song. Is it fast or slow? What's it about? Is the chorus anthemic? Once you've identified the elements and what they do, you can begin to build an arrangement. The first thing to consider is the rhythm. Should any drums and percussion just keep the beat, or should there be fills to heighten the sound, and if so, where?

The bass works with the drums as part of the rhythm section. But does it play a melodic line or emphasis the rhythm? And if a melodic line, what should the bassist play, and where on the fret board - high up, like a lead instrument, or down low?

With a band there's also the question of guitars and keyboards. Generally they'll play the chords of the song and add fills. But much depends on the ability of the players, too, and whether they can play a more complex arrangement.

Arranging For Strings and Orchestra

Anyone arranging for strings and orchestra needs a good working knowledge of music theory. He needs to know the range of all the instruments, the ways they can be played, and the limitations of the instruments. In most cases, string and orchestral parts will be played by session musicians, performers hired simply for that performance, rather than band members. They'll work off a written score, so the arranger needs to be able to write music fluently and imagine the way the different parts work together - a very skilled business. He also needs imagination to write parts that will attract the listener's ear and stand out.

Arranging For A Band

Most bands, be they rock or jazz, work out their own arrangements. They're used to playing together, and are familiar with each other's styles. That helps everything fall into place quickly, although arrangements will alter and evolve over time. Often the songwriter will have definite ideas about how he wants the piece to sound which will colour the final sound. The smaller the band, the more limited are the possibilities, of course. With five instruments you can bring in plenty of textures and variety, especially if one is a keyboard instrument, which can provide a cushion of sound.

Listen to the music on your CDs, or on the radio. You'll discover that everything, from pop to classical, is carefully arranged to maximise its impact.