Home > Using a Studio > The Producer 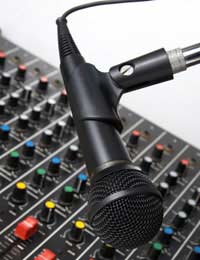 The engineer is the person in the studio with strong technical knowledge. But who exactly is the producer and what does he do?

What A Producer Does

You've almost certainly seen the credit "Produced By…" on many albums, and some producers, like George Martin, Butch Vig and others are famous in their own right. To earn that credit (and the money that goes with it), they essentially made the executive decisions about the music on the album. They decided which songs would be recorded, gave input to the arrangements, and helped dictate the sound and the mix. Often you'll find CDs produced by a group themselves, or by one member.

When To Involve A Producer

Bringing in an outside producer can be a good idea. He (or she) can offer an objective opinion on everything. But there has to be trust between artist and producer for the artist to be open to the producer's suggestions.

It's advisable to bring in a producer early, well before you go into the studio. Play him the material, everything you're considering recording. Listen to his suggestions about the strengths and weaknesses of the pieces and the arrangements. Have him at rehearsals with you to coach you through the material.

Some producers are very technical. Others aren't, but know what sounds good and what doesn't. If you have a good engineer, the first kind of producer is irrelevant. You want him for his ears and knowledge.

If you've employed him, let him dictate the sound. If you're handling the production yourselves…well, simply don't, unless you have extensive studio experience. In the early days most particularly a group shouldn't produce themselves; it simply encourages dissension.

The producer is the one who will decide which takes are worth keeping and which should be discarded. He might spot something in a performance that no one else does - but that's his job.

Essentially the producer and engineer are a team. The producer offers the ideas, and the engineer implements them. The producer's vision might make your music sound bigger than you ever imagined (think of Queen, for example).

It's at mixing time that the producer earns the rest of his money. He's the person who makes the decisions on the mix and decides what the finished product will sound like. Everything you've worked towards rests with him.

More than in the recording, this is where the producer's ears and experience count. He can pick the best takes, the best solos, and have the engineer put them together. Then, of course, he has to get the levels of the instruments correct, listen to many, many mixes until he's satisfied - and then he has to hope his work pleases you!

There are pros and cons to using a producer. Since the chances are that you won't be able to pay one, it'll probably be a friend, which could cause the end of a friendship. Moreover, in the early days an engineer will probably suit your needs doubling as a producer. But if you stick with it, the time will come when you need one!