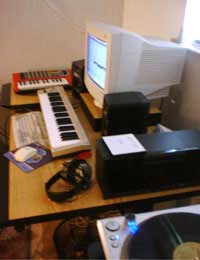 From the advent of portable four-track cassette recorders to the proliferation of computer software for it, recording at home has become widespread. Whereas before recording was limited to their either signed to a contract with a label, or with the money to afford a studio, home recording has made music far more democratic.

There are two stages to recording - that's the actual recording of the sound itself, and the mixing of it after. Obviously, if you only have one instrument, then it's quite simple. But the more layers you add the more complex it becomes.

Depending on the equipment you have, you may only have a certain number of tracks - anywhere from four to thirty-two - to play with. So before you begin, you need a good idea of what's going where. Let's say, for example, that you're a rock band with two guitars, bass and drums, with two members singing. You'll need two vocal tracks, one for each of the guitars and the bass. That's five. And you'll also need an extra track (at least) for guitar overdubs, and another for backing vocal harmonies. On an eight-track machine, that leaves just one track for the entire drum kit. How do you work around that? The easiest way is to use several microphones on the drums, then run them through a mixer into the recorder.

With an older, analogue recorder you could also record the drums first, taking seven of the eight tracks, say, then mix and "bounce them down" onto the spare track, which would free up the seven. The biggest problem with that is that whenever you bounce, you lose some fidelity.

These days, however, since most recording is done on hard drive recorders or on the computer, you can quite easily have a large, sometimes infinite number of tracks available very cheaply (there is, for instance, a free version of the famous Pro Tools recording software available for download).

If anything, mixing is more crucial than recording. This is where you balance the different tracks and create the finished product. You want it to sound as natural as possible, with the backing not too loud, or the voice too low. During a solo, the lead instrument should be properly in front of the rest.

It's a process of trial and error. More advanced recorders, especially software, offer "automated mixing," where you can go through track by track, mixing each instrument, and it will be remembered (and can be altered). The great advantage to this is that you don't have to juggle too many "faders" (the volume controls for each track) at once.

Play the track through several times, so you know where you need to change volumes on different instruments, and set rough levels for everything. Once you're sure that you're familiar enough with all the changes, begin mixing, recording each one. Play back each mix and listen very critically. You have the luxury to experiment endlessly until you have something that sounds right. Play the finished product on different systems - it'll sound different on a car stereo than a full home system, for instance - until you're completely satisfied. Then put it away for a week before you listen to it again. Keep the unmixed master in case you want to go back and make other adjustments later after repeated listening.

The kind of recording system you use depends on what you need, as well as your budget - they range from free to several thousand pounds. But you don't have to spend a fortune to get a good sound - remember, for much of their career the Beatles only recorded on four-track equipment and they changed the world!

Playing With Others
Share Your Story, Join the Discussion or Seek Advice..
With so much free recording software available these days (think Audacity, for instance), all you need is a microphone – many effects are built in to the software. There’s still a learning curve, as there is with anything new, but it’s perfectly feasible to make a home recording that’s almost as good as a professional studio, even though your first attempts will lack subtlety.
Ran - 19-Sep-12 @ 1:49 PM
To get started you just need a computer, a microphone, your instruments and some recording software - free downloads like Pro Tool are available online.
MusicLessonsOnline - 5-Jul-11 @ 12:49 PM
Title:
(never shown)
Firstname:
(never shown)
Surname:
(never shown)
Email:
(never shown)
Nickname:
(shown)
Comment:
Validate: