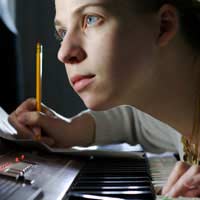 If you’re really going to learn an instrument you’ll need to learn how to read music. But there are some who learn alone who don’t bother, simply playing by ear. However, what if you decide to write a piece of music that you want others to play. Teaching each person their part by ear simply isn’t practical. What you need to do is learn to write music.

Music is written on a stave of five parallel lines, like this:

These contain the notation, and from the position of the stave you can see what the note is. However, each stave is a clef, and there are two, treble and bass, shown here with bass on the bottom:

There can be a line between the two staves, which is the home of “middle” C. So, using space and lines from that up to the top of the treble clef, you’d have C,D,E,F,G,A,B,C,D,E, F.

Whatever the piece of music, it will be in a certain time signature, which is written after the treble or bass clef. If it’s four beats to the bar, it’s 4/4, or common time. 3/4 is waltz time, with three beats to the bar. But it can also be in 6/8, or almost anytime, depending on the piece. Certainly, if you’re beginning, it’ll probably be in 4/4, with four quarter beats, or crotchets to the bar. Count it out, with the emphasis on the first beat of each bar. If it’s 1-2-3-4-1-2-3-4, then it’s 4/4, so write that for people who will play it. The end of each bar is noted by a vertical line through the staff.

A whole note, or semi-breve, will take up an entire bar of 4/4, and last four beats. It looks like this:

A minim is half the value of a semi-breve, lasting two beats, and written like this:

A quaver lasts half as long as a crotchet:

A semi-quaver is half as long as a quaver:

Finally there’s the demisemiquaver, whose value is half a semiquaver:

If you haven’t written music before, working out the relative values of the notes can be confusing. The best solution is to write a draft and have someone play it who reads music well. You’ll probably have made mistakes, but that’s fine; it’s a good way to learn. You’ll be able to go back and correct more knowledgeably.

In addition to having a time signature, every piece of music is in a certain key, too. If you use only whole notes (ABCDEFG), then it’s in C, and you don’t need to make a notation. If, however, the F is sharp each time, then you’re in G, and you’d write # (the notation for sharp) after the time signature on the clef, in the space between E and G. If your piece always has a B flat, then it’s in F, and you’d write b on the middle line of the treble clef. There are a large number of keys, and you should learn them all, or at least have a reference chart before you sit down to write.

This isn’t a complete guide, by any means. However, it does offer you a start in learning how to write music. From here, with a little help, you’ll be able to put your piece – and all that follow – on paper.

Recording at Home
Share Your Story, Join the Discussion or Seek Advice..
You’re right, it’s far from complete, because you also need a general idea of tempo (allegro, for instance), and you forgot rest notes and much more. What’s offered is the very basics, which is all that’s possible in something this length. Anyone interested in studying music, to read and then write, should see a music teacher for a solid grounding.
Tony - 19-Sep-12 @ 1:36 PM
Title:
(never shown)
Firstname:
(never shown)
Surname:
(never shown)
Email:
(never shown)
Nickname:
(shown)
Comment:
Validate: