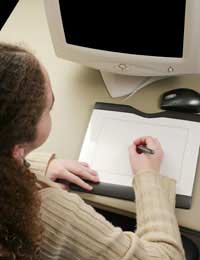 Every CD needs a cover, which is usually part of a booklet, and a "tray card" - the piece of card that's the back of the CD, under the tray that holds the disc itself. Covers, from those on the old LPs to some modern designs, can be very memorable - but how do you go about getting your art on a CD?

Going back not too far, CD manufacturers required that all the artwork for a CD be physically on "film" (not like your camera, but a large transparent sheet). Films are still necessary if a CD is going in for mass replication as they're litho printed. But smaller jobs, usually 300 or less, can be dealt with through digital printing. In either case, these days the artwork is generally supplied either on disk or by files sent via e-mail.

The more complex your artwork, the more it will cost to reproduce. Most people can work well with four-colour, and a basic four page CD booklet. Don't forget, too, that you can have an image printed on the CD (it's usually part of the package price). Most manufacturers will supply the templates you need, with the appropriate sizes and limits. Make sure you follow these very carefully - failure to do so will mean quite literally going back to the drawing board.

Unless you're a good graphic designer, the best bet is to employ the talents of someone who is, be they friend or someone you have to pay. You can, of course, do your artwork by hand (within the templates, of course) then scan it into the computer, saving in the correct file format or converting the image to it, but unless you're sure of your artistic abilities it's best to leave it to those with good design capabilities.

What You Need To Put On

If your ensemble has a logo, or a specific design for the name, that needs to be on the front cover, along with the title of the CD (name and title also need to be on the tray card spines, so they can easily be read when the CD is on a shelf).

Either within or on the back cover of the CD booklet you need the titles of the tracks. Listing credits is optional (credits can be, among other things, group members and other contributing musicians, who wrote the songs, where they were recorded, and thanks to various people who've helped along the way). However, if the CD includes material by people outside the band, that material should be fully credited, including any publishing information.

Since you can print on the disc itself, why not do it? At the very least have the group name and album title on the CD (if nothing else, that makes it easier for people to identify in a pile of CDs!). Unless you're willing to spend more money, the printing will be just black, but that can make a statement.

Working With An Artist

There are companies and artists who specialise in creating CD covers, but the days of instantly recognisable work by people like Hipgnosis or Roger Dean have largely gone. If you work with an artist, be specific in your ideas. You might want a photo as a cover, for instance, and a picture of the group inside (make sure you have the rights and permission to use the images first). In that case, apart from fonts for the lettering, the cover largely designs itself. The more specific you can be, the easier - and quicker - the job of the artist.

With all the different programmes available these days, things you never imagined might be possible. Be willing to listen to listen to suggestions from the artist. He might be able your cover from something mundane into a piece of art with nothing more than a few mouse clicks and a little imagination.

Once the images have been sent, check with the CD manufacturing plant that there are no problems and that everything has been received. It might seem like overkill, but it's really a case of better safe than sorry. It's far better to address any potential problems before the deadline than be scrambling around under the pressure of time.

Remember, for people unfamiliar with your music, the CD cover is the first thing they see, before they hear any of your work. An attention-grabbing cover can work wonders for your CD sales!