The History of Rock Music 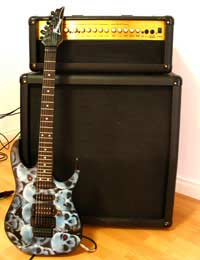 Born in the late 1940s, rock 'n' roll has gone on to become the world's most pervasive music form, developing at a rapid pace and making stars of hundreds over the years. In origin it's a uniquely American form, most specifically from the Southern states, melding the drive of blue and rhythm and blues with the melody of country music.

Most music historians agree that the first rock record was "Rocket 88" by Jackie Brentson, which appeared in the 1951, produced by Sam Phillips at Sun Records in Memphis, although at the time it was considered to be R&B (Rhythm & Blues), with its drive and basis in the 12-bar blues style.

However, it wasn't until the first recordings of Elvis Presley in 1954 (also with Phillips on Sun Records) that rock 'n' roll was said to have been born, although Bill Haley had issued the fiery "Rock Around The Clock" before Presley. Fooling around in the studio, Presley and his accompanying musicians came up with versions of the blues "That's All Right, Mama" and the country classic "Blue Moon" that gave both a rock feel. They helped make Presley into a huge star and spawned the start of the rock era, which included majestic figures such as Chuck Berry and Little Richard. It was wild, rebellious music that teenagers loved.

Rock Starts To Grown Up

The early rock era lasted until the early 1960s, by which time it was beginning to seem a dead end. New blood and strength came thanks to the Beatles, four young men from Liverpool who revolutionised the form with their song writing. John Lennon and Paul McCartney proved to be prodigious talents. In their hands rock acquired a maturity and an even greater popularity. They took the music into new fields with an intuitive grasp of melody and sense of experimentation that lasted until their demise in 1970. They remain the benchmark for rock bands, although many British bands, such as the Rolling Stones, the Who and the Kinks, appeared shortly after the Beatles, forming a British Invasion that dominated music for several years.

One area they touched on was psychedelia, music inspired by the use of drugs, and that found its full flowering in 1967 with the hippies in San Francisco. Groups like the Jefferson Airplane and Grateful Dead became the mainstays of a genre that often relied on sprawling improvisation.

In many ways that was the antithesis of the tightly disciplined progressive rock, which tried to join rock with the sensibility and complexity of the Western classical tradition. The musicians of bands such as Yes and ELP had great technical ability, but at times seemed self-indulgent in proving it, although their sound could have great power and majesty. They were the opposite of hard rock groups like Led Zeppelin, who ran with the blues form, using it as a basis for powerful, long guitar solos.

The more commercial end of rock - pop music - also spawned its own movement, called glam rock. T. Rex, Sweet, Slade and others all made music based on simple rock progressions, but with a slick studio overlay. From 1970 -75 glam was the major force on the U.K. singles charts.

In 1976 punk arrived on the scene as a reaction to the path rock had taken. It stripped the music back to the very basics, as bands like the Sex Pistols and the Clash, followed by others, revelled in their supposed inability to play instruments and sing. Often very political, the punk era, which lasted until 1979, became a watershed in rock music.

Yet, like most things in rock, it couldn't last, and by the 1980s rock had become a fairly moribund form. Movements sprang up, such as the New Romantics, and rock took electronic music on board as synthesizers became a standard part of band instrumentation. But the only style that seemed to grow and develop during the decade was heavy metal, with groups like Judas Priest and Def Leppard finding their musical stride during the decade, and playing to huge crowds around the world.

The end of the decade also brought forth dance music, which grew from the rave scene into a firm genre that encouraged experimentation. Primarily using synthesizers, some dismissed it at faceless, but it proved remarkably popular and sustains itself today.

The dominant rock style of the early '90s was grunge, a phenomenon born in the underground Seattle music scene. A mix of heavy metal and punk, it launched Nirvana, Soundgarden, Pearl Jam and others onto the international stage with music that seemed to speak to the age group called "Generation X."

But as grunge appeared to die following the suicide of Nirvana frontman Kurt Cobain in 1994, nothing really appeared to take its place. Rock splintered into many smaller genres, such as "emo" (short for emotional rock). New stars appeared, like the Foo Fighters (fronted by former Nirvana drummer Dave Grohl), but there was no sense of movement.

There have always been those ready to declare that rock is dead, but it keeps on being resurrected. Although no huge new stars have emerged, groups such as Franz Ferdinand, the Kaiser Chiefs and Arctic Monkeys have proved to be successful, taking their inspiration from punk (and proving also that rock recycles its own ideas very efficiently). Where rock will go next is something no one can predict; the only safe bet is that it will remain alive.