Learning About Intervals and Scales 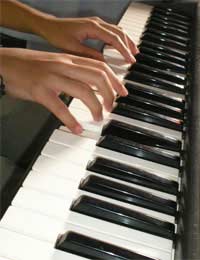 Musical Internals & What They Mean

In Western music the smallest interval we have is the half step. On a piano that would be shown as the move to a white note to the black note above it (intervals are always counted going up). B to C and E to F are both all white notes, but are also half steps.

A whole step is (with the exception of B to C and E to F) essentially defined as being the gap between two white notes on the piano. There are four types of interval – the major, the minor, the diminished, the augmented and the perfect. The different sizes of intervals begin with unisons, then go to seconds, thirds, fourths, fifths, sixths and finally sevenths (beyond that you move to octave).

Major and minor intervals can be seconds or thirds or sixths and sevenths, while unisons, fourths, fifths and octaves will always be perfect intervals.

Intervals can also be inverted, as it’s called, which means that you raise the lower note by an octave, and that obviously alters the relationship between the notes. As a musician you not only need to know all the intervals and their relationships, but also be able to identify them as your hear them.

The Different Types Of Musical Scales

There are eight different types of scales: major, minor, pentatonic, melodic minor, natural, harmonic minor, whole tone and chromatic. Each one possesses different characteristics. For example, a major scale has eight consecutive notes with a specific patter of half steps and whole steps going whole, whole, half, whole, whole, whole, half. In a chromatic scale, though, it goes up in half steps, but going up the scale uses sharps. When it goes down, it uses flats.

It’s also important to know that, as befits its name, a pentatonic scale only consists of five notes, and can be in two possible forms, while a whole note scale can only have six notes, all with whole steps between the notes.

There’s a total of 30 key signatures you need to learn, 15 major and 15 minor. By understand your scales and intervals you’ll be able to see what key a piece is in by the number of sharps and flats shown at the beginning on the stave.